I enjoyed yesterday’s challenge post. While I was working out what I wanted to do I came across some more photographs that I think I might enjoy revisiting, so here is a bonus post that continues my theme of strangers and friends.

For this challenge, we want to see a photo of someone looking truly happy. Not “I’m-smiling-for-this-photo” happy, but really, deeply, twinkle-in-the-eyes happy. When we’re smiling a genuine smile, our whole faces get involved — our whole bodies, for that matter. There’s a light in our eyes. We look relaxed; there’s a forced tension in a fake smile.

This is a Usenet newsgroup: 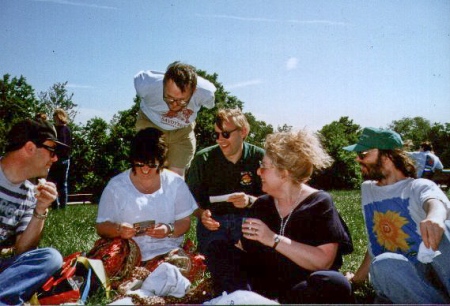 Part of a newsgroup anyway (they won’t all fit in one photograph); the group in question being uk.singles. I was lucky enough to be part of this group at a time when I would otherwise have been alone in the world. Three weeks before I took this photograph I had met none of these people.

When I first posted to uk.singles I was under the same misapprehension as most folks would be – that here was a group where the single of the United Kingdom could get together and interact on-line. I might even have expected it to be a pickup joint… Had I taken the trouble to read the FAQ (hey, I was new to Usenet, and I did not  know the rules) I would have been privy to these key pieces of information:

To post to uk.singles, you need neither be from the UK nor single. The only requirement is that you have been single at some time in your life, know someone who was, or are interested in some of the subjects that single people have been known to talk about.

Most importantly, uk.singles is not the place for personal ads; uk.adverts.personals is. Posting personals to uk.singles will make you very unpopular very quickly….

…Think of uk.singles as the electronic version of something somewhere between a cocktail party and a soap opera. Except here all the guests have bags over their heads and communicate by leaving messages on a sofa, where some messages become irretrievably lost down the back. Then again, you’ve got all day to come up with that devastating one-line response.

What that extract from the uk.singles web site does not reveal is the propensity for group members, known as snugglers, to get together face to face and have a good time.

Without the snugglers, my roll of friends would be so much smaller and my life’s experiences far less rich. Without uk.singles I would never have met the man who was to become my best friend and my bridesmaid, nor would I ever have flown in a glider or sailed in a boat, or tasted a Caol Ila so old and precious that it comes in a velvet box. I would never have dined at an Ethiopian restaurant, met a man named Loretta, or learned how truly cool it is to be a geek. I would never have sat around a fire in a teepee, seen porpoise leaping, or ever have witnessed a man riding a banana. I might never have become aware of Green & Black’s chocolate. *gasp* Imagine the paucity of a life without G&B. 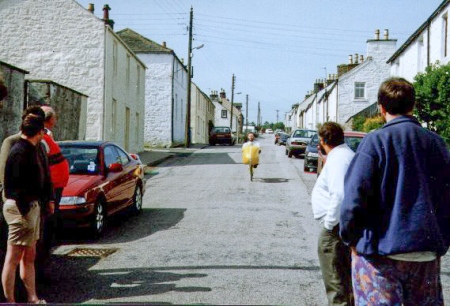 Man on a Banana

Other newsgroups have “Cons” – snugglers favour the “Boink” and it was not long after I began reading and posting to the group before I was winkled from my shell and swept off to a small village in southern Scotland, for a long weekend at the legendary Auchenboink. This was the 97 version, the one that I first attended.

Racked with nerves, I may have been;  I was after all being driven North by another snuggler, who might have been a mad axe murderer,  for all I knew. He certainly looked like one, but Nev turned out to be a pussycat and  became my best friend and a stalwart of my life.

It was a splendid weekend. I was able to put faces to names and nobody looked anything like I had imagined them. I learned that not all members of the group were based in the UK but that most of them loved chocolate. I also learned that the majority of posters were either working in IT or the halls of Academe and that we were all in our way just a little bit geeky. No, that’s not honest. Many snugglers are just out and out geeks. Out and proud.

Some snugglers were recently-singled, some were long-time singled, yet others were not single at all, while some of that subset behaved rather as though they were in fact single… In short, what I found was a normal bunch of people who had much in common and lots of distinctiveness too. We had a great time. We had such a good  time in fact that we arranged to meet up again in a couple of week’s and do it all again; thus I found myself at the end of that month, picnicking on Highgate Hill and documenting the fact that uk.singles posters have a fun time when they get together 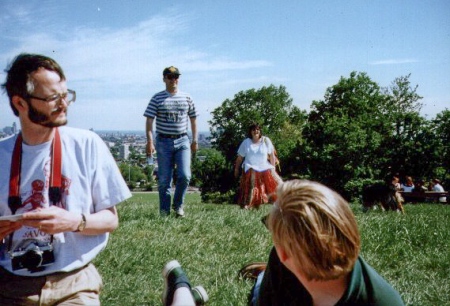 A view of things to come, snugglers about to de-single

Also that not all uk.singles are in fact single and some of them produce new singles for us to play with

I could not tell you now what was provoking the jollity in the main photograph up there – I strongly suspect it was photographs from Auchenboink (97) and some shared experiences creating hilarity.

Other boinks followed; more Auchenboink and boinks in Cambridge, Edinburgh, London and West Yorkshire – big boinks and little boinks, impromptu boinks, and two-mates-over-a-pint boinkettes. Over time, new singles arrived. Other singles de-singled and produced more little singles. Some snugglers crossed the ocean to pair up with a single over here, and others travelled in the opposite direction (- we lost Control that way). Sadly, some have snuggled off to that great Newsgroup in the Sky and are very much missed.

I am ashamed to say that I have lost touch with many of the friends that I made in that part of my life. Some might say that is inevitable once we leave the domain of singleness ourselves. I am far more proud to assert that I feel that they are still there, just a few keystrokes away, should I ever have need of them, or them of me. I truly believe that this loosely associated group of geeks are actually bonded in ways that only we can know or understand and that we are some of us truly friends for life. These photographs remind me of that, and also of the fact that only two weeks before they were taken, we were strangers and I was without a social circle.

One thing strikes me very strongly, looking back, and that is that today’s “Social Networks” have nothing… absolutely nothing on Usenet, when it comes to socialising and making true friends. You see, this was not the only group that helped to save my life and my sanity. Let me tell you about uk.local.yorkshire sometime. That is where I found my husband  🙂

One thought on “Weekly Writing Challenge: Truth Is Stranger Than Fiction. Bonus Post”

Dally a while... Cancel reply